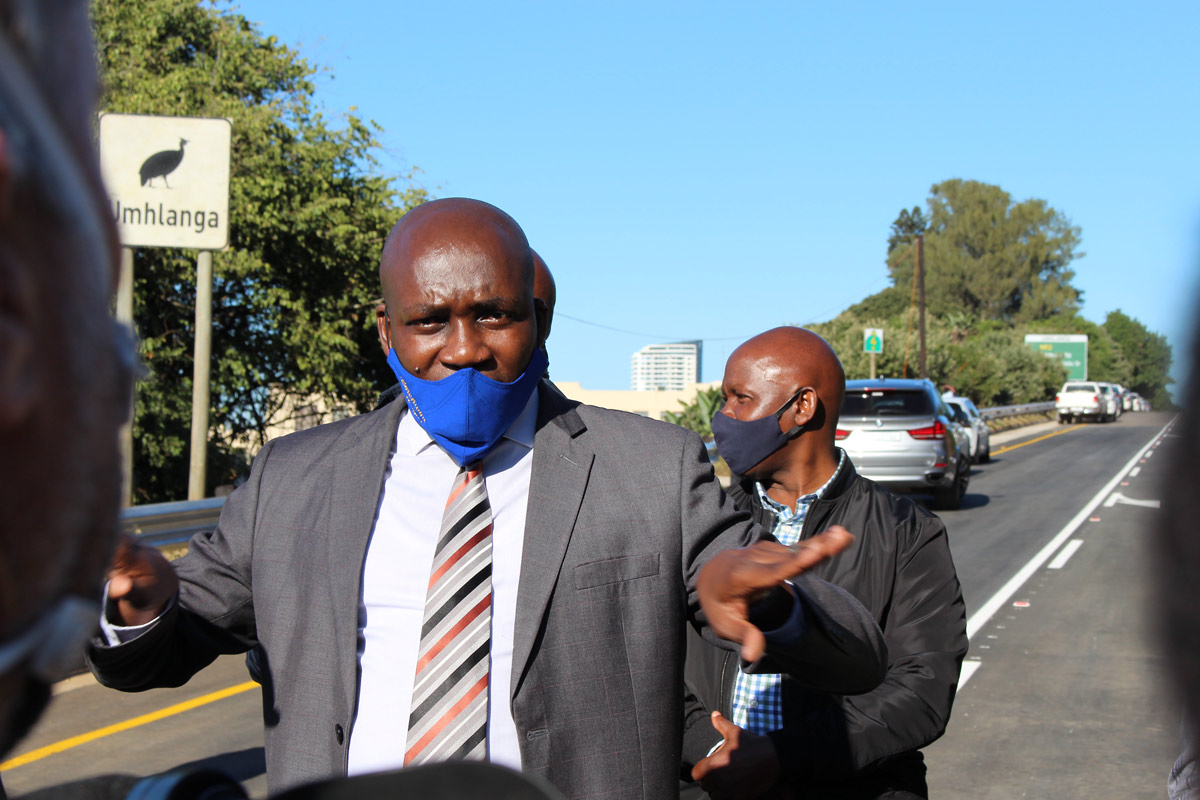 The reopening of a major road serving Umhlanga and its surrounds augurs well for efforts to get tourism in the region back on track. A stretch of the M4 Ruth First Highway, linking Umhlanga with resorts to its north, as well the airport and Sibiya casino, officially reopened on Friday, 12 June.

KwaZulu-Natal Premier Sihle Zikalala cut the ribbon at the site of the repair work, above Breakers Resort, before addressing media on the nearly R45-million project.

The short ceremony brought to a close six months of inconvenience for residents and visitors. The closure forced them to use the N2 highway, adding significantly to journey times.

This after heavy rains in November and December 2019 overwhelmed a stormwater pipe, collapsing a 30-metre section of the M4.

Torrents of water also eroded the embankments above and below the road.

Authorities closed it to traffic between the Umhlanga bridge and the Sibiya casino traffic circle in November.

Repairs had been due for completion in April, but the Covid-19 lockdown stalled work for 39 days.

Zikalala said the closure had affected tourism, particularly over the busy December period. It added more than 10km to the journey between Umhlanga and Ballito.

The premier said he was handing back the road to the people of the region as well as to visitors.

“Investments like this help position us as the gateway to Africa,” he said.

Zikalala dismissed suggestions the authorities had made the work a priority so as to benefit the area’s wealthy residents, while progress with projects elsewhere in the province dragged.

He pointed out the road was important to the local economy. Many commuters, travelling to Umhlanga from Hambanaiti, Ndwedwe, Tongaat, Stanger and beyond, used it.

The reopening would make their lives easier. It would ease congestion on the N2 and improving the lot of the minibus taxi industry.

EThekwini Mayor Mxolisi Kaunda was “very happy to hand over this very strategic link”. He said the road was an import conduit between Durban, King Shaka International Airport and Dube TradePort logistics hub.

DA Ward 58 Councillor Geoff Pullan said it was good news for tourism in the area.

Apart from being a major route to attractions to the north, the M4 between Umhlanga and Umdloti was a “very scenic drive”.

It offered sweeping views of the Indian Ocean and the coastal forest bordering the road teemed with wildlife, said Collins.

Workers had completed the geotechnic reinforcing to shore up the embankments.

They were still busy with the stormwater outlet into the Umhlanga Lagoon, near Breakers Resort. But Shaun Naidoo, contracts manager for Devru Construction, said they expected to be finished within a week.

The only person who seemed to have mixed feelings about the end of the project was local resident Anita Fraser.

Her home, on 14 Portland Drive, above the road, narrowly escaped destruction during the December storm.

However, she would miss the absence of traffic which had brought grey and red duikers and bushbuck out of the Hawaan Forest.

Now read… A pash for the promenade: It’s been like starting over again